Sign Up for Rawsome News
For Email Marketing you can trust.

If you would like to receive our newsletter directly in your in-box please call or send us an email to say so and we'll add you to our list. If there's something you'd like to see as a monthly column, let us know. We're here for you and we want to make our information as helpful as we can. Thanks for reading. 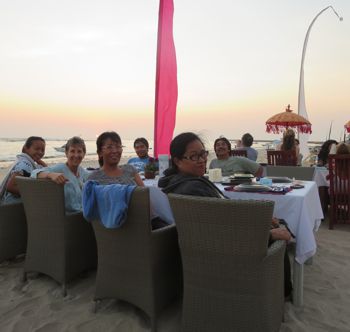 This year I have been overwhelmed, and my correspondence with you, treasured newsletter readers, could have been thought of as "on the back burner" ... if I used burners! Life's ups and downs are just as intense for Living Food Enthusiasts like me. Enuf said.

I'm back! Back from a delicious trip to Bali, and a restorative sojourn on Maui ... 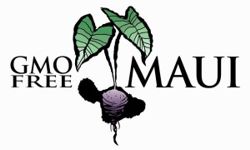 just in time to see Maui County's voters take a decisive step toward outlawing ALL GMO agriculture on their island. Maui, famous for more golf courses, and more pesticides, than any other place on the planet, alongside all the inevitable consequences -- more species extinction, greater coral reef loss, than anywhere else on earth -- that I can't help feeling that a corner has been turned. An important corner.

Many of us wonder how long voters will allow their votes to be bought by Big Money that doesn't have the welfare of We the People anywhere near their top ten corporate objectives. The Chemical Agriculture lobby that controls GMOs in the United States (primarily Monsanto, Coca-Cola, and General Mills) spent HUGE in Maui, the most money ever spent on any campaign there ... and lost! As I write, I see that Oregon's GMO labeling measure, thought to have been defeated in that state's most expensive campaign ever, is up for an automatic recount, with only 809 of the 1.5+ million votes cast separating the Yeas and Nays on Measure 92.

In Washington, the forces of darkness in the GMO industry have vowed to kill the Maui County law, are secretly meeting with "our representatives" to craft federal legislation that will trump the best efforts of any localities and states that try to force truthful labeling. (Read more about that here.)

Why are we not surprised? Their job: keep the marks ignorant. My job, and yours, is exactly opposite. The so-called DARK Act -- Denying Americans the Right to Know -- would also bar states from enacting laws that make it illegal for food companies to misrepresent their products by labeling GE ingredients as "natural." The DARK Act would even limit the FDA's power to force food companies to disclose GE ingredients.

In case that's not sufficient, the industry greed-heads have introduced retroactive legislation that slams the door on any future efforts to require honesty in labeling products containing GMOs. What is it, do you suppose, that these guys are so afraid of? 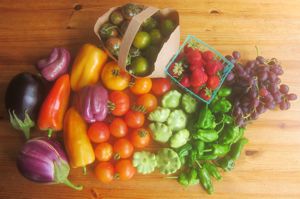 Methinks our only hope at this point, where money clearly owns the political process, is to be the savviest consumers we possibly can be. A regimen consisting predominantly of fresh, local food from known and trusted producers is as GMO risk free as it's possible to get. And for those products -- oils, grains, condiments -- that cannot be locally sourced, we need to look for those "No GMO" labels, and encourage the schemes that call for voluntary truth in labeling by producers. Our best advocates in this effort are local natural food stores, whose owners and employees are vigilant and suspicious of weasel worded labeling on their shelves. 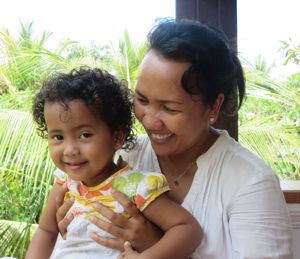 Ayu and her mother Made 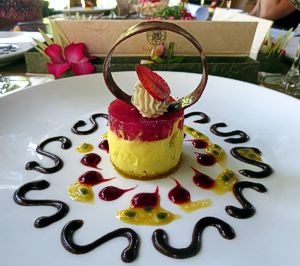 (see album on facebook)
My Bali Lies Over the Ocean

For most of October, I was in my second home, Bali, visiting with my second family there. For anyone who remembers Bali from ten or more years in the past, the changes there are astonishing. Monkey Forest Road, once a windy, lonely track through rice paddies out of Ubud, is now a busy, bustling thoroughfare. Traffic, always fierce, is worse. And yet somehow, my Balinese friends are as graceful and gentle as ever. Along with development have come many more choices and better supplies of organic food -- food here has always been mostly local -- and living food restaurants are thriving. I have updated my website's list of favorite eateries in Bali for those traveling that way. 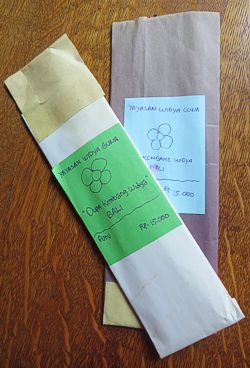 My dear ones at Widya Guna, the orphanage that we support through More Than a Nut Milk Bag purchases, was as heart-warming as ever. They have developed ongoing craft projects for the children, especially those with developmental disabilities. I found their homemade incense particularly heartwarming and brought a bunch home for Holiday presents for my family. It is also a favorite of the children. They love to spend time learning how to dip each bamboo stick into wax, then roll it in the scented dust of herbs. They offer the incense for sale, and receipts go directly into each child's bank account.

I also found things humming along at Bumi Sehat, our favorite birthing center. With funds from the CNN Hero award they are busy planning for the clinic expansion into a new home, in the lovely village of Nyuh Kuning, not far from where they are now. I found the Vitamix I took them in January in good use making nutritious Bali Red Rice Milk for the new expectant mothers when they come for clinic hours and check ups.

For many more photos, see my Bali album on facebook. 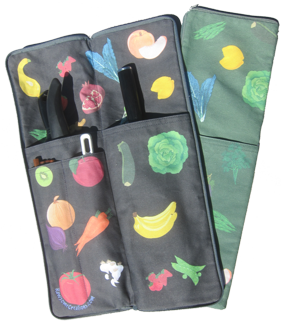 Sewn from heavy twill fabric imprinted with Ellie De Silva's fruits and veggies, the Rawsome Knife Case easily accommodates the knives and edged tools I need when I travel or cook outside my kitchen. Three inside pockets easily contain my big and little knives, a grater, a peeler, my pet chopsticks, and whatever else I want to confine in a single manageable package. Closed, the case measures 16.5" long and 5.5" wide; unzipped, it's 10.5" wide. Two outer pockets contain paperwork and items needed on the road, including one special pocket for business cards. Available in very limited quantities, $25, and, before January 1st, shipped anywhere in the US free. Order online.

Please use the PayPal button above or
contact Brenda to order yours! 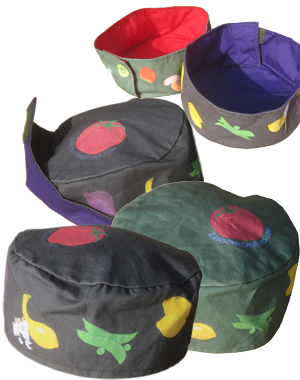 Made from the same heavy twill embellished with Ellie's fanciful fruits and veggies on one side, and lined with either solid red or purple fabric, the reversible Rawsome Chef's Hat adjusts to fit any size head because of its velcro closure. $15; specify charcoal, green, or don't care when ordering online.

My editor and business coach Michael and I have been working all year on a fabric project, turning Ellie DeSilva's wonderful fruit and vegetable icons into something wearable and carryable: chef's hats and knife cases. 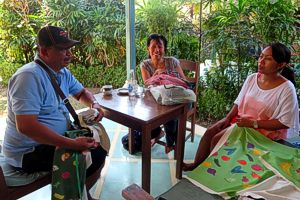 Working with my Balinese sewing team (see album on facebook)

While I was in Bali, I worked with my fabric team there, and produced a small cache of pre-production prototypes that I am now eager to get out into the field, so you can help me improve them. Both Michael and I have been carrying our chef's knives and various cutting tools in early prototypes, and we can testify that they work well. 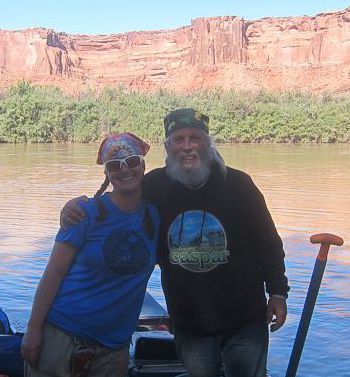 Sienna and Michael (wearing my hat!) on the Green River

Michael took his on a long camping trip with his daughter (and my webster) Sienna, including ten days canoeing through Utah's Canyonlands National Park, and they report that the knife case performed superbly under difficult and primitive conditions. Michael also wore a chef's hat -- "My favorite hat. I don't like hats with brims or bills; they obstruct my vision and I bump my head. These hats fit snuggly even in a gale, shade my head, and keep what's left of my hair from tangling. People keep asking, 'where'd you get that cool hat?' This hat is a winner!"

More Than a Nut Milk Bag

Of course, these are still our flagship product. We're shipping for free, and have plenty of stock to fulfill all your nut milk making needs.

There's a brand new page at my website, The Multiuse Bag, detailing many of the innovative uses that you have told me about for these multi-use bags. Here are a few of my favorites: 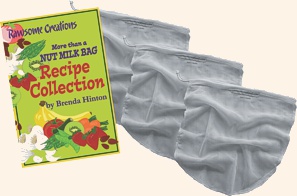 And I am pleased to announce an addition to my "Find a New Use, Get a Bag" offer. For a few years I have offered a free bag to anyone who reports a new and innovative use for a More Than a Nut Milk Bag. I am getting serious now: if you also provide a photo we can use, I'll give you credit (if you like), use your photo online and, possibly, here in the newsletter, and send you TWO free bags.

Please use the PayPal buttons above or
contact Brenda to order yours!

There are some new recipes added to the online archive. One of my favorite Balinese tonics, Jamu, and our Rice Milk recipe recently shared with the staff of Bumi Sehat and Widya Guna Orphanage. 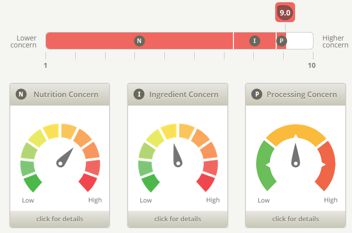 One of my favorite watchdog organizations, the Environmental Working Group, has launched a useful Food Score app that evaluates common packaged foods on three criteria, nutrition, ingredients, and processing concerns. Take Coca-Cola Classic (please!): on a scale from 1 -- perfectly edible -- to the worst possible score of 10, this nasty solvent scores a solid 9. Drill down a little deeper, and you see that the big concern here is the sugar/low calorie sweetener content, with too much salt and fat the very definition of junk food -- 14 teaspoons of added sugar per serving!

Just for fun, I typed in "Wolfgang Puck Organics" and got a look at some of that food show superstar's new line of canned soups. In light of Chef Puck's recent epiphany about healthy food, (see this article), I thought I might conduct a little due diligence before plucking one of his deceptively labeled soup cans off my megamart's shelves. According to the EWG, all 13 of his new products rank right in the middle of the EWG scale, fives and sixes, what might be termed "not too bad." What could possibly be wrong with Wolfgang's Organic Gluten Free Free Range Chicken Soup? Come on, you guys, it's doubly free! Well, as with most canned goods, the toxic chemical BPA is used in the can lining. Then there are serious ingredient concerns: a serving contains 55% of the daily salt recommendation plus sugar and that delicious if mysterious ingredient "flavor." If you're not already drooling in anticipation, Wolfgang's white (!) rice is likely laced with arsenic! Chow down, America! 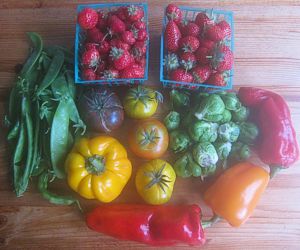 Here's another SAD tale -- remember, SAD is shorthand for the Standard American Diet -- about a Community Supported Agriculture farmer shutting down her operation because of dishonest competition. Dear Readers: caveat emptor, and know your food!

I love this time of year. I know, I say that with each change of season, but ... Isn't the light playing off the landscape at dawn and sunset particularly lovely during this time when Mother Nature is gathering herself to burst into Spring? 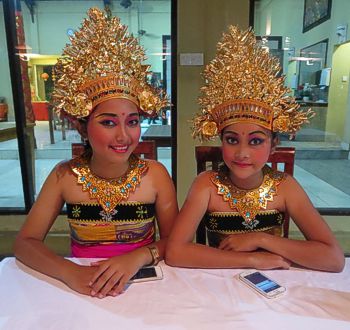 Writing this over the Thanksgiving weekend (while diligently avoiding any commercial activities) I am moved to thankfulness. What a year this has been! I want to express my gratitude to some very special people who helped me navigate its tough spots: my husband Michael; my friend, mentor, and editor Michael; my webmistress Sienna... Most importantly, I want to THANK YOU, my readers and customers. Without you, the simple project that began seven years ago with one simple idea and a nut milk bag would not continue growing and producing a real difference in the lives to many people.

Happy Holidaze ...and Remember to Eat Your Veggies!